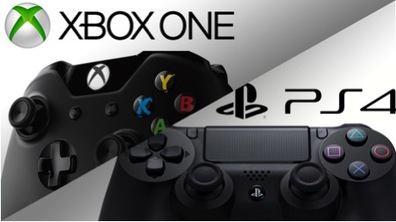 Finally the eighth generation of consoles has arrived and still the argument rages on about which of the new releases is superior; Microsoft’s innovative approach to an all-in-one media giant or Sony’s sweet and simple, yet extremely powerful, gaming goliath. I am talking, of course, about the very controversial topic of the Xbox One versus the PlayStation 4.

Price:
I will start my comparison with the basics. The first thing to notice with the two console is the price; a key factor which will impact a person’s decision massively when they are picking between the two. The PlayStation 4 itself is actually only £349 ($399 in the USA and €399 in Europe) whereas the Xbox One is a whopping £429 ($499 in the USA and €499 in Europe)!

The controllers are both, more or less the same price; £45 for a PS4 Dualshock controller (as well as an additional £10 for the charging station) and £44 for the Xbox One controller (£55 for the controller with a charger kit). The games are a similar story; the launch titles range from £45 to £50 and pre-orders from £50 to £55. Unfortunately for PlayStation fans, Sony have now made it so that the PlayStation network membership is an additional fee, with a year’s subscription of PS+ going at the rate of £37, with the Xbox gold membership at a slightly cheaper price of £35.

The peripherals for the consoles also add up, such as the PS4’s camera which is going for £49 and the Xbox’s headset for £20. All in all, it seems as though the two are fairly evenly matched as even though the PS4 itself is a lot cheaper, when the peripherals are included the extra bits and bobs boost up the cost to an even ground.

Hardware:
As for the hardware, the odds seem to sway in Sony’s favour. Even though both the consoles share the 2 quad-core Jaguar AMD CPU’s (which run the programs and perform the instructions the user inputs) and the Xbox’s CPU clocks in at 1.75GHz as opposed to the PS4’S 1.6GHz only 6 of these cores are used for the actual games, 2 of which are open for other multimedia programmes like Netflix and apps. All of the PS4’s CPU cores are dedicated to whatever programmes are being run at the time so performance is improved, but only to a very slight degree; the difference lies in the GPU (Graphics processing unit).

Simply put the PlayStation has a much stronger GPU than the Xbox’s; For every 18 computing units it houses the Xbox has only 12, meaning quintessentially it has 1.5 times as much processing power. The peak performance of both systems shows clearly which is superior in this aspect as despite the Xbox’s tremendous 1.32 teraflops, the PS4 can reach an astronomical 1.84 teraflops!

Verdict: PlayStation 4 is the winner here!

Social networking, new tech and interfaces:
One of the main aspects of today’s gaming market is social integration and networking, which is one of the Xbox’s main strengths, especially with the development of the “Snapping” feature so friends can switch between Skype calls, internet pages, the game they are currently playing and so on, which is particularly easy with the voice command recognition software, or so it seems. 9 times out of 10 the voice commands work, but if the user stutters or is not loud enough then the system will not respond, and this is also the case for people with strong accents.

The Kinect’s new and improved 3D depth perception technology means interactive games and video calls are a lot sharper with a much higher resolution. The Xbox live membership has remained more or less unchanged; gold membership transfers from the 360 console over to the One, your avatar and achievements are maintained and any funds in your account are also transferred. Unfortunately, many users are displeased by the interface of the One due to Microsoft now adopting a display extremely similar to Windows 8 and find it very hard to manoeuvre between menus and different dropdowns, although this is still very much open to debate and may be reconfigured at a later date.

Sony seem to have taken a very basic approach to this aspect of their console, retaining the key features of the PS3’s online networking, but this is not to say they have not made progress. The 2 major changes are that now in order for fans to engage in online multiplayer they must subscribe to a PlayStation plus membership and the innovative “share” feature. Despite some disappointment at Sony’s conversion to an online feature which will now be at a price, a lot of perks come with a PS+ membership like free games and discounts on films and apps in the store, and the fact membership can be shared between a PS4, a PS3 and a PSvita makes the prospect all the more appealing. The share feature is definitely a ground-breaking trait and allows users to livestream their content via Twitch or UStream, take screenshots, record video clips and then upload these files to social networking sites like Facebook and Twitter.

The interface for the home screen is very plain and simple and is possibly a very clever ploy of Sony’s to counter Microsoft’s tactics; whereas the Xbox One is focused around being a multimedia giant the PlayStation 4 is still a gaming console through and through. This is emphasised by the specs of the hardware which are unrivalled by the Xbox’s because unlike the very complex dual operating system and overburdened hardware the PS4 is remaining a purist, lean, mean gaming machine.

Verdict: It’s very close but based on Microsoft’s development of the Kinect and voice commands (even though it isn’t yet perfected) I would have to say they are the victors here.

Games, exclusives and backwards compatibility:
Now for what we all want to hear about: the games. Sony boasts they have managed to secure 140 games which are currently in development, 100 of which will be available within a year of the launch date and 40 of which are exclusive (some of these are the same, we will be getting some of these exclusives within the launch year of course). Among the ranks are Infamous: Second son, DriveClub, Knack and Killzone Shadow fall much to the fans’ delight and the Xbox has revealed they have the exclusive rights to games such as Deadrising 3, Ryse: son of Rome and Forza 5.  Sadly, quite a few of these titles have met numerous setbacks including the much awaited Watchdogs and of course the eagerly anticipated DriveClub which will now not arrive until several months after their projected launch dates.

The representatives at Sony have also stated that besides the fact that there is no backwards compatibility (and the story is the same for the Xbox) their partnership with GaiKai gaming means that PlayStation 3 games can be directly streamed by a cloud service and there is also a prospect of a disc conversion system in the PlayStation store, giving them a very large edge on Microsoft’s seeming limited library of games.

Verdict: It seems too early to say really, both consoles have great exclusives so it depends on which games you prefer. At the moment I would say it’s a draw although Sony’s partnership with GaiKai is very promising.
In conclusion it seems although the two consoles are pretty evenly matched at the moment, Sony seem to be winning the console war; they have better hardware, a good range of games including huge exclusives, brand new features to the online experience and have still maintained a fairly focused ideal of what a gaming console should be like. This is not to say the Xbox One is bad, on the contrary, it’s multimedia capabilities, voice recognition and Kinect features are revolutionary but sometimes simplicity is the ultimate sophistication. Really it could be debated either way which is better, fans are always bound to be biased towards one or the other console and so truly there can be no victor in the never-ending battle.