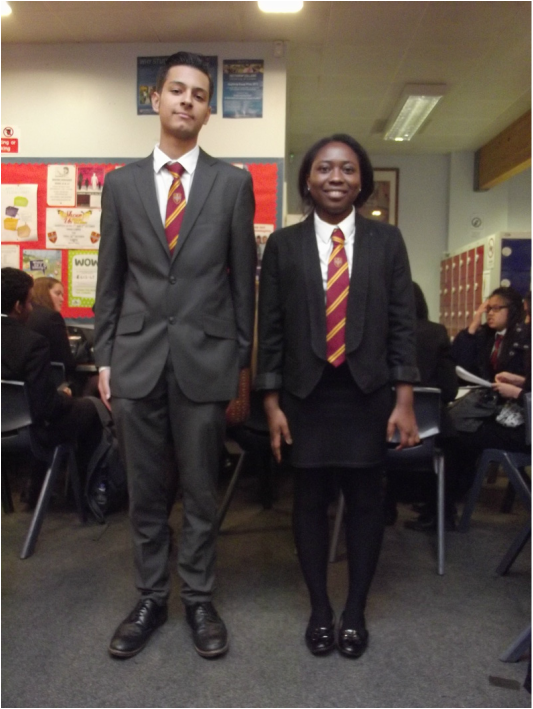 With the Sixth Form introducing the new uniform to the Year 12 cohort, students have been discussing the topic. In this article I aim to review some of the perceived pros and cons of uniform so that you can come to your own decision on the matter.

In the UK school uniform has existed for centuries having first been introduced on a large scale during the reign of Henry VIII. They were, at this point, called ‘blue coats’- the name originating from the dye used. Since then there has always been a history of uniforms in British schools. The Elementary Education Act of 1870, which allowed for a basic primary level education for all children, also led to an increase in uniform usage. Near universal usage of uniform continues to this day in schools and, as can be observed here in Chingford, its use is increasing in Sixth Forms. From this then it’s obvious that, generally, in this country the pros of uniform are considered to outweigh the cons. Although this isn’t to say that all countries share this same view. Take Finland for example. It is currently ranked 1st in the world by education company Pearson for the quality of its education, this is compared to the UK which, in the same survey from last year, was placed sixth. This survey is no fluke; Finland is consistently awarded first or second place by a variety of different education groups doing different styles of surveys. Students in Finland don’t wear a uniform so, if the imposition of uniforms is, as most institutions would say, principally about improving the quality of education, where does this leave the UK? It is that in this country uniform does help in increasing national educational attainment or is it rather a way of window shopping; conforming to what politicians, Ofsted and parents expect as being evidence of a ‘good school’?

Perhaps this is the main reason why schools in this country decide to introduce uniform policies. Discipline, or the achieving of it, is, in many schools, equivalent to the Holy Grail. It is said, in that ubiquitous phrase, that uniform means ‘fewer distractions’, less judging and competition amongst students, more time spent working and consequently better results in exams. This is certainly the view of many politicians including the former Children’s Secretary, Ed Balls, who, in 2009 wrote to all local authorities urging them to increase discipline in their schools. Balls kindly made suggestions on how this aim could be achieved. One such suggestion was the introduction of a ‘smart uniform policy’. Maybe there is some truth in this idea although many leading academics do say, after conducting extensive studies on the subject, that they aren’t’ convinced. In 1998 David L. Brunsma and Kerry A. Rockquemore concluded, after conducting research into uniform, that it has no effect on ‘behavioural problems or attendance’. They then went further saying that they found ‘a negative effect of uniforms on student academic achievement’.

Of course there are many other, more practical, reasons as to why uniform may be introduced. These can range from decreased preparation time in the morning to less of parents’ money being spent on extra clothes that their children would wear to school- such benefits certainly have their merits but nevertheless when there is talk of uniform it is usually in relation to discipline. Perhaps this reveals what discipline means to most people in the UK. For many of us discipline means the stripping and degrading of individual rights, (what uniform does), accompanied with stringent punishments for any breaking of rules. It is generally believed that this is what will make individuals carry out the tasks and do the things that the need to do. Yet, in the context of a school, detention isn’t necessarily synonymous with discipline. Rather discipline is an individual or a group acting together and doing what is required of them, so in schools or Sixth Forms this would mean students working hard in order to get good results. Such a scenario doesn’t usually doesn’t stem from punishments and lack of liberty, it originates from a collective will and the feeling of having a stake, two things that can’t be imposed rather they have to be fostered. If you believe this is just some utopian idea with no evidence to back it up then just take another look at Finland. Here, aside from the lack of uniforms, students call teachers by their first names and don’t do any exams until the age of 18. Additionally students can’t be streamed, the private education industry has been banned, there are no inspectors, no league tables and even 15 years olds only have a maximum of thirty minutes homework per day. You could say that such policies mean that students could too easily go ‘off the rails’ yet 60% of students go on to higher education and the World Economic Forum says that Finland is the third most competitive country on the planet largely down to the quality of its education system.

Perhaps such policies work because individual circumstances in Finland allow them to do so and perhaps they wouldn’t all work here in the UK, however it does provide us with something to consider and makes us think about uniform and the narrowing of individual rights over, as is happening in Finland, the expansion of them.