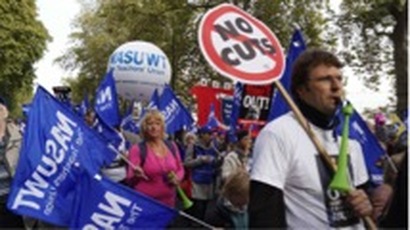 Thousands of schools across the country closed for the day on Thursday 17th October, as two of the largest teachers’ unions NUT and NASUWT take strike action over disagreements regarding pay and pensions.  The NUT say that “The Secretary of State for Education is refusing to engage in genuine talks with the NUT and the NASUWT about teachers’concerns, despite numerous requests by both unions, however Education Secretary Michael Gove simply commented that there is “nothing child friendly about industrial action” so it seems that the breakdown of communication between the two parties is essentially the reason for the strike.

According to the NUT, the changes which the disputes are based on are the following

• Cuts and other changes to teachers’ pay

• Adverse changes to their pensions

One of the schemes that Michael Gove has implemented is performance related pay. This is where teachers’ salaries would reflect how well they work over a school year. However the NUT argues that the issue with this is that “evidence has shown that it is not effective” and will lead to decisions based on funding pressures or whether your face fits”.

This is also reflected by the majority of teachers, with only 16% of teachers agreeing with the change and that it will be effective. However this is not the only change proposed. Gove has also confirmed that teachers’ pay will go up by only one per cent in 2013, while inflation rises by a significantly larger percentage.

How does it affect students?  Well, one day not in school may not make a significant difference to our learning and if the strike allows the government to see that there needs to be change in the way that they communicate with teachers then surely it is a positive thing? However, on the other hand,  it could also be argued that\t the strikes are forcing closures of schools which could otherwise run a normal school day.