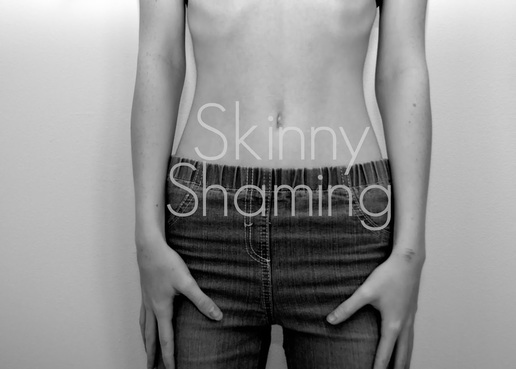 With the ever-expanding use of social media, teens are exposed to many memes, gifs, photos, etc. My worry is that these are often used to promote derogatory messages. For example, recently, I have noticed a reoccurring trend on the Internet: the increasing attack on young girls' body image - particularly, skinnier girls.

There seems to be growing resentment towards girls of smaller body types, with more and more people 'retweeting' or 'reblogging' images designed to disempower petite women. To demonstrate, I'm sure many of us have come across a picture of a prominent public figure such as Marilyn Monroe, with the caption "REAL girls have curves" but have you ever thought about what this message implies? Are women who do not have curves fictional, should they be discounted? By saying they are 'nothing but skin and bones' do you mean to say they are withering away, invisible or unhealthy?

What perplexes me most about these comments is that many of the people who support them feel insecure about their own body, or have otherwise felt bullied for their weight in the past. They may believe they have been under-represented by the media, and that this implies that they cannot be beautiful. All everybody desires is the acceptance of their body type.

Which is exactly why I cannot understand why someone who has possibly been discriminated against for the way they look in the past would want to do the same to others. Tell me, what is the difference between telling a girl to 'stop eating' and telling another to 'eat something'? Why is it offensive to make judgments about a larger girl's health by calling them 'emotional-eaters,' but presuming that all models must be 'anorexic' is condoned? Why are 'thick' girls allowed to love their 'curves,' while others are not allowed to love their 'bones'? Is it really true that you need to have something 'for men to grab on to' in order to be perceived as sexy? Why can Gemma from TOWIE stand at the opening of her plus-size clothing range with a sign that says 'If you're thin, you're not coming in!!!' but if a slim woman were to do the same with one that says 'If you're wide, stay outside!!!' for her petite clothing range it would be seen as hurtful?

On the other hand, and perhaps even more frightening, there are some people who say such comments out of admiration, with complete ignorance to their potentially harmful connotations. For example, after saying I was 'nothing but skin and bone' and 'looked anorexic,' the person then defended these statements by saying "Oh don't worry, it's a good thing!" Is this really what it has come to? Has the deliberate exclusion of various body types by the media really led to young girls romanticizing the effects of eating disorders and even intending them to be complimentary?

I have also found that skinny girls are rarely allowed to express issues with their body image, having their concerns and insecurities brushed aside on the basis that 'at least they are thin' whereas girls of larger body types can drum up a lot of sympathy, some using their prejudice against smaller women to do so.

I would like to emphasize that I am in no way accusing everyone of participating in 'skinny shaming,' or trying to brush 'fat shaming' aside on the basis that it is no longer in existence. Quite the contrary - I know many girls are still bullied for their weight and I know that 'skinny shaming' only exists because 'fat shaming' is so severe. I am merely pointing out that instead of attacking the other side in order to ease our own insecurities, we should be striving to end the shaming of all body types.

So please, don't think that shaming one end of the spectrum is a viable way to comfort the other and remember that in order to be accepted we must all demonstrate acceptance.

Promote body positivity for every body.