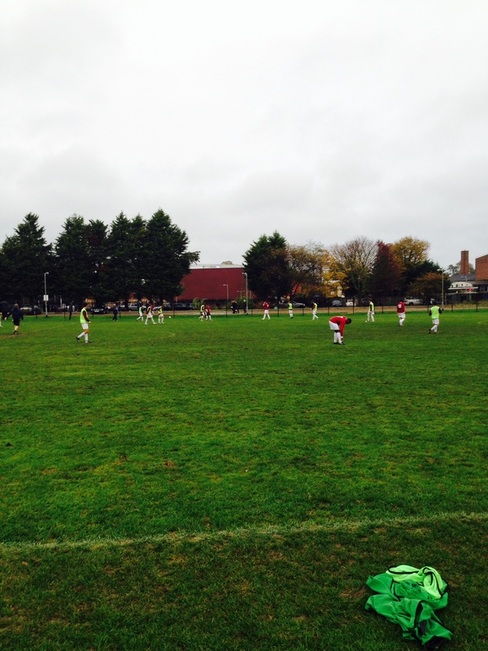 A rainy November afternoon in Croydon played host to Langley Park and Chingford Sixth form in the National Cup Fourth Round. The game started brightly despite the treacherous conditions, with both sides trying to take a foothold of the game. Free kicks played a big part in the opening minutes as players struggled to keep their feet, but neither side were able to find the net. The first major break of the game came from the hosts after Chingford lost possession in the centre circle, with the ball crossed in by Langley Park from the near side, only to be beaten away by Chingford goalkeeper Mooney. The first real goal scare sparked the visitors into life, with a period of consecutive corners taken by Nicholson, but Chingford still couldn’t find the opener. It was only until 20 minutes when Langley Park finally broke the deadlock, with a quick break down the right flank against the run of play, with a low cross into the box. Chingford failed to clear their lines after several attempts and the ball was fired past Mooney and into the back of the net, putting the hosts ahead midway through the first half. The goal was unable to settle the game, with play becoming scrappy at times for both sides; but Chingford were still pressing for an equaliser. After several failed attempts of breaking into the box, Redhead slotted the ball through to Letchford, whose legs were hacked away inside the box, penalty to Chingford. Gordon stepped up and fired the ball into the right-middle of the goal from 12 yards, a great response from Chingford. With half time approaching, Chingford finally settled into the game, with strong tackles across the back from Goodland and Costa. With only seconds remaining, Langley took a shot from long range, which looked destined for the top corner, only for Mooney to leap and push the ball over the bar. The first half ended 1-1, leaving both sides with all to play for in the second half.

Chingford started strongly after the break, with Nicholson and Redhead playing slick one-two football, only for their efforts to be blocked by the goalkeeper. As the half progressed Langley began to tire, allowing Chingford to pile on the pressure with countless corners, but nobody seemed to be able to find the net. With penalties looming, another Chingford corner was met by a towering header, only to rattle against the crossbar. Possession was regained by the hosts, who powered through the midfield and into the Chingford box, with two efforts at goal saved by Mooney. Unfortunately it wasn’t to be Chingford’s day as a third shot from just inside the box was slotted into the bottom corner, putting Langley Park ahead with just minutes remaining. After the restart Chingford converted to a 3-5-3 formation, in the hope of finding an equaliser to take the game to penalties. Goalkeeper Mooney was sent forward after a promising attack from the visitors, only to be hooked away, leaving the Langley striker to roll the ball into the empty net. The game finished Langley Park 3-1 Chingford, with Mr Millan’s Ching Army crashing out of The National Cup at the 4th Round. However the boys have done incredibly well to progress this far in such a prestigious competition, something of which they can all be very proud of, well done boys!