Play Review: The Curious Incident Of The Dog In The Night-Time 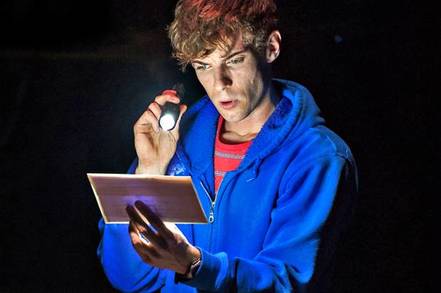 On Thursday 5th of December the drama department held a trip into the West End of London to see The Curious Incident of The Dog in the Night Time at the Apollo Theatre. I can say in advance of the writing to follow that this production is worth going to see if you want to change your views on disability or see a good play and the play is good value for money. The play is about a boy called Christopher Boone, who is hinted to have Asperger Syndrome, who is trying to work out the mystery of who killed Wellington, the next door neighbour’s dog. He ends up finding out more than he wanted to know. The show has a great amount of comedy, but it is mainly a dark storyline which really could challenge many people's views on disability.

The stage was set out in a rather surreal way. There was only one set and that was a large grid on a huge blackboard (like the Matrix) which the actors used to their advantage by drawing on it which helped us reflect on the emotions of the characters. Props were put on stage through cupboards hidden in the set. For example as Christopher builds his train set on the floor, he takes more pieces from the cupboards at the sides of the set.

The acting in the play is exquisite, you really will begin to get into the play and believe you are watching the life of an extremely troubled individual. I must give praise to the actors as they were always in character and the father (who is supposed to be a person from Sunderland) had an extremely good accent even though at the end of the play he proclaimed himself to be from London.

If asked to rate this play out of 10, based on the fact that it is such good value for money, and the way it challenges one's preconceptions, I would rate this as 8.