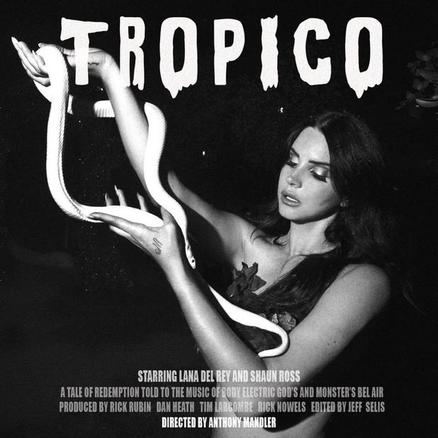 Tropico, a recently released short film by Lana Del Rey, is possibly the best thing I have watched in a while. A ‘tale of redemption’, Tropico follows two star-crossed lovers throughout eternity, set to the music of ‘Body Electric’, ‘Gods and Monsters’ and ‘Bel-Air’ with each song depicting a new period in the couple’s life.  In the most basic terms, it’s a rather unconventional love story, but with Lana Del Rey, the fans always knew Tropico would never be that straight forward, nor uncontroversial…

The long-awaited masterpiece starts off with a series of short video clips, allegedly from Del Rey’s own archive. Flowers bloom, and clouds roll as Lana’s dulcet voice mutters, what seems to be, extracts of the Bible. In-keeping with this very religious theme, Del Rey, dressed as the Virgin Mary, slowly fades onto the screen, asking to be forgiven for her sins. We are then quickly whisked away to Del Rey’s personal Garden of Eden, as she prances round the very pink forest with her albino Adam (Shaun Ross) in tow. (Did I forget to mention that she, alongside being the Virgin Mary, is also Eve?) Tropico becomes even more surreal, when it becomes evident that they are not alone: Elvis Presley, Marilyn Monroe, Jesus and a gun-wielding cowboy are also there with them. Del Rey‘s vision is clearly not conventional or traditional, and will certainly upset some people. Then suddenly, as if from God’s own personal boom-box, ‘Body Electric’ starts to play and Lana Del Rey and Shaun Ross begin to slow dance, surrounded by lambs and white pigeons (or doves, the mind boggles).  As the music picks up pace, so does Adam and Eve’s not-so-slow-slow-dancing and the situation starts to heat up. By this point you'd probably be just as confused as I was. Eventually, Eve finds a white-python in an apple tree; we all know where this is going. However, just as things seem to be becoming a little more conventional, with Eve taking a bite of the forbidden fruit, Marilyn Monroe lets out a horrified scream and we are reminded that, yes, this is Tropico and no, nothing was ever going to be ‘normal’.

From the Garden of Eden we are torn, and placed in an L.A strip club, watching Del Rey get down and dirty. Lana narrating the scene with a confusing stream of consciousness, muttering phrases like ‘the bones in the marrow in the bones’, whilst white noise sounds in the background. As ‘Gods and Monsters’ begins to play, it becomes evident that Adam and Eve are now a very modern couple, working in a hard-ware store, who’d have thought it? Del Rey, now a ghetto-Latina-lady smokes and dances on car bonnets with her, equally ghetto, gal pals. Whatever the inspiration for this dark, modern turn, Del Rey embodied it well, a tattoo reading ‘Trust no B**ches’ making for an interesting detail.

We then cut to yet another scene, as Adam breaks into a rich business-man’s private party, pointing guns at the strippers and stealing the rich-men’s jewelry and cash. By this point it’s clear that God’s original children are well and truly off the rails. Lana Del Rey beings to narrate the scene again, telling us that ‘the Garden of Eden had transformed into the Garden of Evil’, which is clearly, in this instance, very true. However, as the light melody of ‘Bel-Air’ beings to fade in, and it becomes sunny, we realize that actually, the couple is looking for redemption. The sun beams down on the happy couple, and in a glowing yellow meadow, as the sun begins to set, we realize that they are perhaps not so sinister, just misunderstood (maybe).

Whatever Del Rey is trying to tell us, the scene really is, from a visual point, beautiful; the sun, the meadow, and Del Rey’s slow-motion cinematic twirls, all come together to create something very special. Tropico almost a piece of art, a series of captivating images sewn together, and narrated by herself and her songs, to make an arresting piece of film. Hats off to Del Rey for shocking, surprising and inspiring us once again. Did I mention Adam and Eve are finally redeemed, floating back up to heaven to be with God once more (hopefully minus the dodgy tattoos)?

Some might call Lana Del Rey pretentious and annoyingly whimsical, but I think she’s great, truly great. I guess she’s like Marmite - you either love her or hate her. After watching Tropico, you will definitely be the prior.