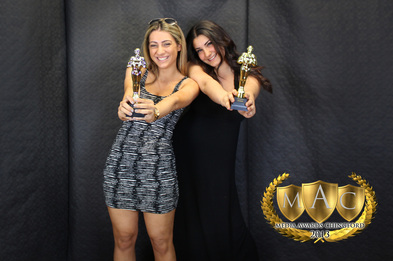 The MAC awards, an extremely prestigious event for the Media students of CFS, was a celebration of all the hard work that has been done by both the AS and A level students over the last year.  All the proceeds came from ticket sales and went to the charity Haven House, a charity which operates across North and East London and West Essex, and is dedicated to supporting families and carers for children with life-limiting conditions.

Taking place on Tuesday 9th of July, the MAC awards was in the main hall, which had undergone a miraculous transformation, completed by the long expanse of red carpet which was laid out along the centre in true Hollywood fashion. When guests first arrived, there was an opportunity for photos, and then there were allocated seats for media students hopeful of wining an award on tables named after production companies such as Warner Brothers and Universal Pictures.

With the winners of each category receiving their very own “Oscar”-esque statue, to win one of these awards felt very prestigious, especially as winners got to walk up the red carpet onto the stage to receive their award. The hosts, Ayshe Zaifoglu and Jay Risheq, provided an entertaining commentary for the guests introducing the presenters of each award, as well as winning a few awards themselves. The awards themselves were presented by several of the teachers who each introduced the award, followed by a short montage of excerpts from each of the nominees' products. The speeches given by the winners were in some cases short but sweet, many of them thanking their parents, and the actors in their group.

Throughout the evening there was a showcase of examples of students work, both in print and short media clips to give the audience and the rest of the students a better idea of just how impressive and creative some of the work was. With a wide range of media products, from print, short clips and websites, it was good to see such a variety of different ideas coming from all the media students and also fun to watch the clips back and remember the fun had when creating the products.

Halfway through the night, Christina Allen and On-Kei She gave a spectacular performance: Christina sang ‘Titanium’ by David Guetta and Sia whilst On-Kei was on the piano. Although there was one minor hiccup midway through the performance, the pair continued like professionals and gave a stunning rendition of the song.

A special mention has to be made to the students who stayed behind after school to organise the hall and to arrange the tables. Also a massive thank you to Mr Christophy and Mr Ash who organised all the technical equipment and gave up their time to organise a fantastic event, and also the teachers who presented the awards.