Earl’s Court 2 once again played host to this year’s London Film and Comic Con, presenting what can only be described as a sea of stars from both the small and the big screens. With the sun shining brightly down, burning a few shoulders in the ticket queue, and with fellow nerds roasting in their costumes, it provided the perfect weekend entertainment for any comic book/film lover.

For any Game of Thrones fan who missed the event, well…I sure wouldn’t want to be you! Game of Thrones stars Lena Headey, Jason Momoa, Peter Dinklage and Joe Dempsie headlined the weekend, alongside The Walking Dead’s Norman Reedus and Sarah Wayne Callies.

Entry tickets are priced at a measly £6, and I managed to grab myself a couple of Batman and Robin comics for £1.50 each. But Comic Con is easily comparable to any other expensive London event, with autographs, photo shoots and talks being between £20-40 each, depending on the star. So if you’re planning on attending the 2014 event, make sure your wallets are stuffed and you’re ready to “splash the cash”.

As always, the Star Wars team pulled out all the stops, with Imperial Stormtroopers literally ‘storming’ around the venue, as well as Peter Mayhew, best known for playing Chewbacca in the series and Kenny Baker (R2-D2) being among the many stars who attended. Many men were dressed in suits and converse, imitating the one and only Tenth Doctor, David Tennant, meaning Dr Who gained a fair share of representation within the event. Terminator, Star Trek and even Thunderbirds were also included, not to mention comic book artists and writers filling the chairs behind the stalls.

Anime such as Bleach, Deathnote and Naruto were also present, providing a variety of different types of cartoons and themes to suit all who attended. It’s safe to say Comic Con this year could only be described as ‘nerd heaven’.

Comic Cons are clearly becoming more widely regarded amongst fans within Britain recently, the attendance of plenty of stars and well known faces from the past ensured the arrival of many from all across London, other parts of the UK and even, the world! 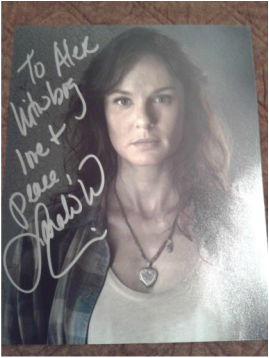