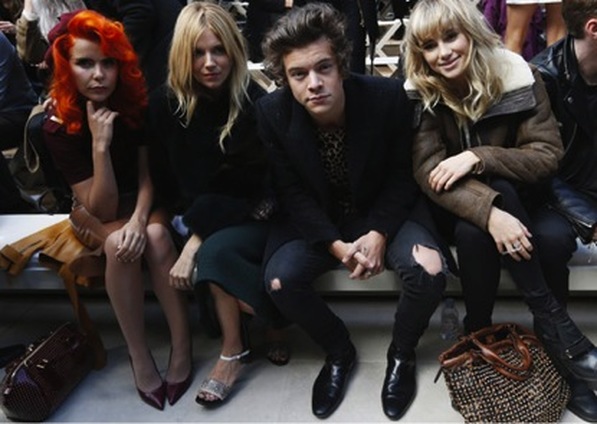 Commencing on the 13th September 2013, London Fashion Week presented the Spring/Summer collection soon to hit our shelves in 2014. LFW consisted of five consecutive days which included 75 catwalks, the majority of them being broadcasted live all over the world. London Fashion Week is deemed to be one of the highest profile fashion events in the world, placing London and British fashion firmly on the global stage.

This year catwalk shows unveiled the work of household names such as Burberry, Mulberry and Vivienne Westwood, who have to make way for young talent such as Holly Fulton, Tom Ford and Henry Holland. Henry Holland is an up and coming stylist turned designer whose signature piece is ‘the t-shirt’. Holland’s collection was designed with the typical ‘London girl’ in mind, capturing the words bold, colourful and irreverent. Soon to hit the shelves on the high street are next season’s hottest trends consisting of floral prints, shredded denim, pleats and mullet dresses.

Burberry who managed to fuse together the sexy and the protective, by creating pastel garments with over sized embellishments set one of my personal favourite trends for next season. Burberry’s key designer; Christopher Bailey, produced fitted, sexy dresses and separates mostly in powdery and pastel shades in lace, with a slouchy outwear made of cashmere, jersey and suede. British heritage is on the uprise due to the importance of being proud of where you come from so most of the materials were sourced from Nottingham and Scotland. Christopher Bailey stated “I like the idea of working with old fashioned crafts.”  As a noted fashion label Burberry, received a whole array of celebrity guests such as Paloma Faith, Sienna Miller, Harry Styles and Suki Waterhouse along with renowned -models; Cara Delevigne, Edie Campbell and Jourdan Dunn whom I am sure we will see wearing the latest trends hot off the runway very soon.

After months of speculation, a shocking event occurred; Marc Jacobs confirmed leaving Louis Vuitton after 16 years of dedication to the label. The 50-year-old designer felt it was the right thing to do in order to allow him to focus on his eponymous brands, Marc Jacobs and Marc by Marc Jacobs. Jacobs’s last words on the matter were, “... To all those lovely people that I've had the great good fortune of getting to understand and work with in this city. It's been so great. Every season it seems that we get to up it more and more. And this was just everything. Every. Single. Thing. Lesage and Lemarié... all of them, full on.”