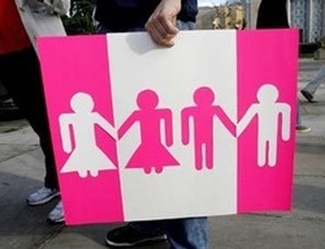 Same-sex marriage is one of the most debated topics, especially in recent times where there has been developments with the UK Bill proposing that same-sex marriage should be legalized. In June, the Bill was passed to the House of Lords where the consensus was in favour of these changes and there was a rejection to the amendment with the purpose of wrecking the proposition. Another step closer to gay marriage officially being legalised in England and Wales, a success in many eyes including my own. However, this highly controversial issue has created a lot of opposition, perhaps unknown to the facts about same-sex marriage and civil partnerships- that which same-sex partners were restricted to. Why is this step forward for gay marriage needed?

Prior to these recent changes, the option was 'civil partnerships'. Those who say that the option of civil partnerships is 'enough', or that marriage and civil partnerships are the 'same', are wrong. This change, to include marriage, is necessary. There are many features which distinguish between these two types of union, important to all of us as humans. For example civil partnerships, although deemed as an essential change in recognising same-sex relationships, do not have the equal social rights as marriage, does not allow the children in that relationship to be legally recognised as their child and many more restrictions including complications and even denial of inheritance. It's not just the fact that the label of 'wife' or 'husband' is restricted to 'civil partner' but much more- recognising that a same-sex couple are equal. They can be loving parents to children. I think the 21st century has presented that children no longer need the typical 'nuclear' family to have a 'stable' upbringing. Instead, these constructions of what a family should and shouldn't be are social constructs with no established proof. Being in a same-sex relationship or a heterosexual relationship does not quantify how good of a parent you are to children and those who take care of children, love them and raise them should legally be their parents.

Equally, the reluctance and rejection of gay-marriage perhaps embodies and promotes the idea that those who
are homosexual are choosing their sexuality- an old-fashioned and, if anything, ignorant view. It's not something that can be changed, or as some may say 'fixed', and therefore their shouldn't be a view that they are doing anything wrong or immoral- something which a lack of marriage perhaps suggests. We all have a right to equal treatment and rights. This equality, that is given at birth, can of course changed by how one chooses to behave, for example prisoners. So to restrict the right of marriage to only heterosexual couples, when the union of marriage should be a right for everyone, suggests that they have chosen who they are attracted and fallen in love with. To not evolve society to include marriage between same-sex marriage means living in a society which does not recognise the immediate misconceptions about same-sex relationships being wrong. It's an outdated view that we 'choose' our sexuality, disprove my psychologists and socialists but yet it's still a concept  promoted my many. Can we please just open our eyes? To be homophobic and to restrict rights of same-sex relationships could easily be compared to racism, where people were discriminated against for something beyond their control. Don't let society consistently repeat the same mistakes with ignorance for anyone else.

One of the biggest oppositions to the Bill has been from religious institutions. One should question the how big an input religious views should be on laws. Michael Bloomberg explored how religious rules and views should not dictate society. He compared it to how some religions “prohibit eating pork... and alcohol” in his article exploring Gay marriage in The Guardian. I think for Bloomberg to put it in these smaller situations and topics about diet is incredibly smart, presenting that it would be unthinkable to let religion dominate society. Religious input is incredibly important naturally, but logically religion cannot be the priority in making the rules.

Finally, probably the main bases of my pro-gay marriage ideology, before the extents of  research I've done, is the fact that I do not find it in my position to restrict anyone. I think as humans we should all thrive in wanting others to be happy, as well as the obvious selfish priorities. Taking away any view, religious or another kind, about gay marriage, if two people want to be together- together in marriage- then who are we to stop that from happening? Having same-sex marriage opens up many opportunity's for people. To reject gay marriage purely on the bases that it goes against your ethos and may 'offend' you, despite it not directly affecting you is selfish. Taking away anything about this highly controversial topic, I want to live in a world where no one is given precedence and where we finally reach a moment of equality. To have this ideal and perfect world then the changes in favour of gay marriage was necessary!