Film Review: The Hobbit - The Desolation of Smaug 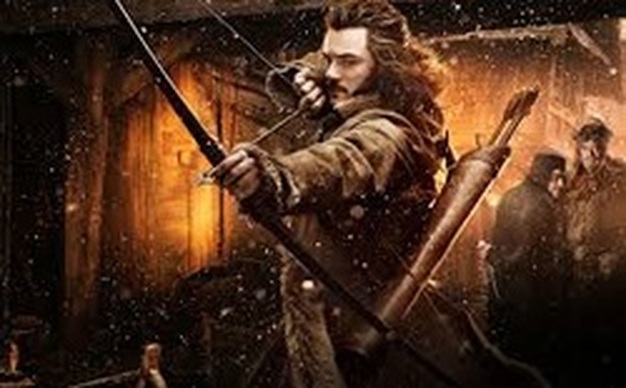 For some people, December is linked with that time of year that everyone loves: Christmas, whereas for Tolkien fans, it isn’t just Christmas that is on their minds when December comes around. It’s been a year since the rowdy dwarves of Thorin’s company barged into the home of Bilbo Baggins unannounced, looking to defeat a power hungry power dragon and reclaim the lost kingdom of Erebor. Having seen the first leg of the journey, many fans are excited to see what awaits the troublesome company.

Peter Jackson does not do things by halves, and this includes the duration of his films. The Desolation of Smaug extends to 2 hours and 41 minutes, and very much like last year, I found myself battling with my human urges to run to the bathroom. Including last years, the adaptation of Tolkien’s children’s book has so far guzzled up five and a half hours of our lives, (this excludes the amount of times I’ve watched An Unexpected Journey over and over again at home), meaning the final instalment is likely to add another 3 hours maximum on top of that number.

An Unexpected Journey, in comparison to the second instalment was frankly more of a children’s film, there was less action and more importantly, it was centred on the company’s slough through Middle Earth, with the animated characters looking less menacing than the Orcs and other creatures we became accustomed to in The Lord of the Rings trilogy. However, there is an awful lot of Desolation to wade through before we arrive in the presence of ‘Smaug the Magnificent’.

From the outset, when Gandalf (Ian McKellen) sends Bilbo Baggins (Martin Freeman) and the dwarves towards the Lonely Mountain led by Thorin Oakenshield (Richard Armitage), the world of the film is visually captivating with an immense amount of detail. Peter Jackson is an undeniable master of special effects, with the characters stepping from the book’s pages, leaping, shooting and swinging out of the 3-D screen. For me, the moviemakers made me want to join Bilbo on his journey, even if it means facing down Azog, the leader of the Orcs or Smaug himself.

As the film continues, the formidable challenge of reaching Erebor takes the company along the treacherous and misleading paths of Mirkwood, where they tangle with giant hungry spiders, enough to make David Attenborough suffer from arachnophobia. Eventually overcoming this with the help of hostile Elves of the Woodland Realm, led as in The Lord of the Rings by Legolas (Orlando Bloom), Jackson provides us with a beautiful She-Elf heroine, Tauriel (Evangeline Lilly). A new bow and arrow wielding heroine that can easily match up to the likes of The Hunger Games’, Katniss Everdeen, Tauriel is immersed into an love triangle, with the real question remaining, will she end up with the mesmerising platinum-haired elf or the scruffy hunky dwarf?

From this point onwards, we are presented with the entertaining spectacle of barrel riding, making Tidal Wave at Thorpe Park look mediocre. Then Bilbo and his gang are aided by another new character, the rather handsome Bard the Bowman (Luke Evans) - Ladies, you’re certainly in for a treat with this film, Legolas, Kili (Aiden Turner) and Bard, what more could you want? National treasure Stephen Fry takes on the role of the sly Master of Lake-Town, with the Lonely Mountain from here being only a short distance. At the same time, Gandalf, after sending Radagast (Sylvester McCoy) away with a message for Galadriel (Cate Blanchett), knowingly enters the Orc-ambushed Dol Guldur and engages with the Necromancer (Benedict Cumberbatch). Engulfed in the ambience of the Satanic sounding Black Speech, and with constant foreshadowing throughout the film with images and illusions of the Eye of Sauron, the audience then realise, it’s not only the fire-breathing dragon Middle Earth has to fear.

Last but certainly not least, the stage is set for Smaug, with Benedict Cumberbatch again providing the voice for another villainous antagonist. With the Ring of Power in his pocket, the furry footed Bilbo wanders into the treacherous yet golden lair of Smaug. His task: to steal the mystical and treasured Arkenstone which lies somewhere in the rolling mountains of treasure guarded by the territorial dragon.  Freeman, who has generally grown as Bilbo in the role, from the cowering wimp who cared more about doilies and smoking Old-Toby pipe weed to the plucky hero in the movie who is confident enough to swing his sword and call it ‘Sting’, should be praised. It is truly impossible for me to think of anybody better to fit into the role of the once reluctant Shire-bound Hobbit.

Although Jackson should be praised for bringing the magic of Tolkien’s creations to our screens for the past 12 years and remaining true to the author’s vision, it surely wouldn't hurt if he could realise how long an audience’s patience can last. As a massive Tolkien lover, I generally have no issues with watching Jackson’s long running blockbusters (I have got the extended editions of all of The Lord of the Rings trilogy sitting at home, so there’s enough evidence of that fact), however as I heard one of my friends mumble, “This film is so long!” next to me, I realised the ginormous running time of most of his films (King Kong also, for example) are not an easy ride for a tetchy and fidgety cinema visitor.

The Desolation of Smaug was a truly enjoyable experience, and it is certain I shall have to keep up my tradition of seeing There and Back Again on the day it comes out like I did with The Desolation of Smaug and An Unexpected Journey. Unfortunately, we all have to wait another 12 months, damn you Peter Jackson! Although excited for There and Back Again in 2014, I cannot help but feel disappointed at the fact that the Tolkien magic which Jackson has provided us for the majority of the 21st Century, is near its end.