Film Review: The Hobbit - The Battle of the Five Armies 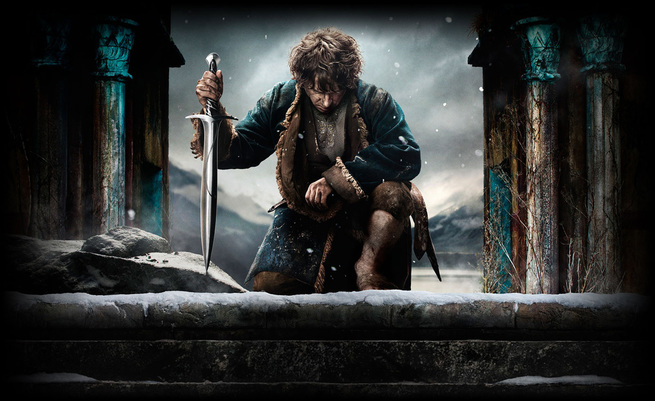 After thirteen years, J.R.R Tolkien’s magic has finally passed through Hollywood and left a huge fan base in its wake. It all began in 2001 with the release of the first film in The Lord of the Rings trilogy, following Frodo to Mount Doom until 2003, which was then succeeded rather unconventionally by its prequels, The Hobbit: An unexpected Journey (2012) and The Desolation of Smaug (2013) where we followed Bilbo to The Lonely Mountain. Considering the recurring theme of little men going on epic journeys to big mountains, it is hard not to view The Hobbit: The Battle of the Five Armies as Peter Jackson’s own personal summit.

The usual cast return once again, with Martin Freeman as the unexpected hero Bilbo Baggins, along with Richard Armitage, Ian Mckellen, Evangeline Lilly, Luke Evans, Benedict Cumberbatch, Orlando Bloom and Cate Blanchett. With such a strong cast, some of whom have been inhabitants of Middle Earth for the whole thirteen years, I was eager to see this talent pour out of the screen and I went into this film already confident that I would enjoy it….. It didn’t disappoint.

The movie, as the title suggests, is essentially one large battle involving five armies (Shocker!). This is either a selling point or a turn off depending on your preference. I found it very reminiscent of The Return of the King, with rousing speeches and lots of goose bump moments of sacrifice and heroism. It picks up exactly where the previous instalment left off: Smaug awoken and preparing to burn down Lake Town. I was excited for this considering it was something every fan had been awaiting since The Desolation of Smaug’s dramatic end. The opening twenty minutes saw Luke Evan’s character, Bard the Bowman taking centre stage and I soon found I was enjoying the scenes featuring Bard much more than the rest because I found him the most relatable, human character. His scenes also tended to be the most exciting. After this first sequence, which could arguably have fit into the previous film, the final chapter is solid. Jackson used a lot of artistic licence here with Tolkien’s original novel glossing over the titular battle in a few pages. So if you are expecting a direct adaptation as a few of my friends were, I’m sorry to disappoint you. Luckily, having not read the original novel for many years and remembering very little of the final act, I was able to silence the little voice at the back of my head screaming “That never happened!” for the most part.

Jackson’s trilogy has insisted on tying itself closely to The Lord of the Rings, re-introducing characters such as Legolas (Orlando Bloom) and Saruman (Christopher Lee) to help bridge the gap between the two trilogies. This is both entertaining and frustrating at the same time, with Bloom specifically providing some exciting set pieces, but also being unexplainably missing for segments of the movie. I cannot help but feel that, if you are going to build this link, one should commit to it having Legolas as a consistent character rather than just turning up and simply disappearing again. Another example of a clumsy alteration to Tolkien’s original narrative is the Tauriel-Killi-Legolas love triangle, which admittedly I have never been a fan of. It seemed more prominent particularly in this instalment, and I feel as though I would have been more accepting of it if it had ended differently.

Judged on spectacle and performance, the film is the best of the three. Martin Freeman continues his strong run as Bilbo, Lee Pace is perfectly unsettling as Elf lord Thranduil and Luke Evan’s is likable and heroic as Bard. The special effects are as strong as we’ve come to expect from a Middle Earth outing (except for one scene). The tone of this third instalment is also much darker, which is a fun alteration. One of my biggest problems with the other Hobbit films is that they had some laughably ridiculous scenes, such as Thorin’s brooding musical number in the first film. Thankfully, these are less apparent here but some moments still create a jarring mix of comic relief and violence. This was a problem that The Lord of the Rings never suffered from because the series committed to a darker tone throughout, only relying upon a Dwarf/Elf bromance for a few laughs here and there, whilst The Hobbit trilogy relies much more greatly on family audiences.

I am aware that thus far I have sounded largely negative about the 144 minute experience, I would like to stress that despite all this I did enjoy The Hobbit: The Battle of the Five Armies. I felt that it was a fitting conclusion to The Hobbit trilogy as well as the Tolkien movie universe as a whole, although certainly not replacing The Return of the King as my favourite of the bunch. Bard quickly became one of my favourite Middle Earth characters, filling the Aragorn role of this series and I was on the edge of my seat for most of the movie; this feeling was evidently shared by a friend of mine who cheered at one point in the climax. Therefore, I highly recommend this year’s biggest popcorn flick because my problems are with the series as a whole, not with this movie in particular which I found to be almost as entertaining as The Two Towers in 2002.