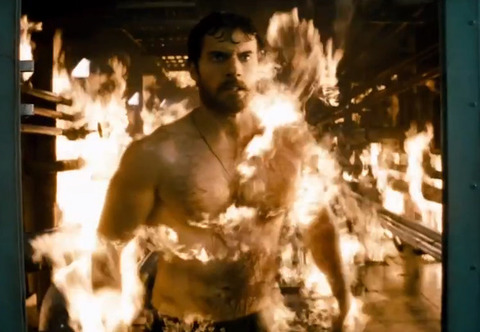 Directed by Zack Snyder (Watchmen, 300) and produced and co-written by the brains behind the Batman trilogy, Christopher Nolan, it’s no surprise that the newest addition to the list of superhero movies, Man of Steel has caused something of an uproar amongst fans and movie critics alike.

Added to the list of British actors, Andrew Garfield and Christian Bale who have stepped up to the roles of superheroes in the past, Man of Steel brings forth heartthrob Henry Cavill as Superman/Clark Kent/Kal-El, preceding Superman Returns (2006) star, Brandon Youth. Amy Adams stars as love interest and Daily Planet reporter, Lois Lane, Russell Crowe as Jor-El and Michael Shannon as the nefarious and destructive General Zod.

The origins story sees the birth of Kal-El, whom we refer to as Superman, being transferred to Planet Earth by his parents (played by Crowe and actress Ayelet Zurer), as Planet Krypton erupts and crumbles to smithereens. As we all know well, baby Kal-El shoots into Earth only to land in Smallville, Kansas on the farm of the Kent family (played by Kevin Costner and Diane Lane).

Appetites were whetted with the opening of Planet Krypton, and from behind the 3D glasses, there were no disappointments. Snyder has brilliantly recreated, and more importantly rebooted Superman and the story behind Planet Krypton by providing us with these astounding effects, which more importantly makes me, feel a little disappointed that I didn’t pay extra to go and see it in IMAX. This would be one film I would highly recommend to see in 3D, and although many people are apprehensive to part with £9 for a ticket, it’s a small price to pay.

Conceived and written by the Dark Knight team of Christopher Nolan and David S. Goyer, this latest attempt to reboot the Superman series has initially ensured it to be one of 2013’s most highly anticipated films.  Snyder spared no expense making Man of Steel a truly epic-scale superhero adventure to compete with other releases, such as Iron Man 3 this year. Although there’s no argument that Snyder, Nolan and screenwriter David S. Goyer didn’t do this, many critics have argued that the action scenes were too boring, dull, and very much engulfed in tedious CGI with repetitive fight sequences.

It could be argued that Man of Steel follows the CGI based theme which every post millennial superhero film now has, for example, the Iron Man trilogy and Green Lantern, although Ryan Reynolds completely obliterated the role of Hal Jordan to the extent at which I could bear no longer to watch it.

Lori Hoffman from Atlantic City Weekly writes, “The problem with Man of Steel is that while the background story and character development are solid, the action sequences are distressingly generic and bland.” Not only have the action sequences been classed as ‘boring’ and ‘dull’, but also ultimately many have compared the styles of these scenes to that of Nolan’s depressive and obscure themes founded in the Batman trilogy. Nolan was bound to play a larger part than just producing the film, and it could be said Snyder may have looked to such an icon and his style after the critically acclaimed success of The Dark Knight and The Dark Knight Rises.

I have to agree with Hoffman on this, the storyline is well structured and ensures we constantly want to see and know more as the film progresses, but I myself found the action to be too heavily influenced by what Nolan provided us within the Batman trilogy. Therefore Man of Steel can be very easily compared to this, possibly influencing all of this controversy. Having said that however, Snyder did deliver some intense action scenes, which cannot be ignored or criticised, but instead provides us with some intense visuals and excitement.

Unlike previous films or editions of the Superman franchise, the Clark Kent we all came to know and love over the years, particularly through the enchanting Christopher Reeve in the late 70s-80s, is somewhat missing from Man of Steel. The reporter by day and superhero by night interpretation of the hero has very much been scrapped in this film, with only a cameo appearance of Henry Cavill in the signature glasses and suit towards the end (ladies brace yourselves). Simultaneously Man of Steel introduces a Superman devoid of emotion and detached from the figure all fans experienced in the comic books, portrayed as rather reserved, shy and confused about his acceptance within society. This vulnerability draws emotions within the audience itself to feel empathy for Superman as well as his predicaments – having to deal with the lunacy of General Zod for example.

In relation to empathy, there are many touching scenes in this film, taking time to focus on the more human side of things, rather than just the accustomed powers of Superman. Snyder should be praised for simply allowing the movie to produce an emotional effect, which is missing from many of the superhero flicks, recently.

The worldwide success of the Batman franchise ensures DC Comics are pinning their hopes on Superman to redress the box office, considering Marvel’s The Avengers shooting to the spot of the third highest grossing film of all time last year. Man of Steel, in my opinion is a brilliant start to accomplishing a balance between the two comic rivals. Cavill filled the role perfectly, with it being difficult to even establish his British accent behind his American one, and I’d even go as far to say it tops Iron Man 3 and Batman Begins. We could ask, is it another astounding DC trilogy to match Batman, having already grossed higher than Batman Begins within less than a month of release?  With a sequel having already been announced and lined up for a possible 2014 release, we’ll just have to wait and see.

Arguably, Man of Steel is easily one of the most controversial movies of the year; with many fans possibly clinging onto the original Superman, Christopher Reeve, but this is open for debate. It’s 2013, and with it comes a rebooted and suited Superman in the form of chiseled Henry Cavill to coincide with the modern times. It may not be a Superman we are all familiar with, but maybe we should embrace such a brilliant reboot instead of gunning it down and comparing it to the outdated 70-80s films, it is the 21st century after all!