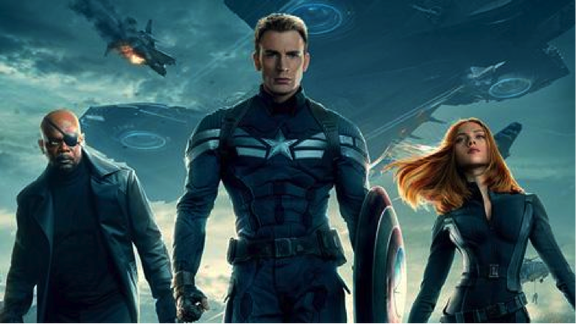 The latest movie to build upon the already expansive Marvel cinematic universe, Captain America 2: The Winter Soldier, is probably the strongest entry in the series to date. The new darker tone and grittier action makes Cap’s new stand-alone movie a force to challenge even the magnificent Avengers, which he also featured in.

Chris Evans reprises his role as the soldier out of time, Steve Rogers, once again along with Samuel L. Jackson’s Nick Fury and Scarlett Johansson’s Natasha Romanoff/Black Widow who also return. Cobie Smulders (How I Met Your Mother) also returns as Agent Maria Hill, playing her largest role yet in the two movies she has featured, as well as a few new cast members: Anthony Mackie as Sam Wilson, Frank Grillo as Brock Rumlow and Robert Redford as Alexander Pierce. Redford’s presence pays homage to the classic espionage thrillers of the seventies he starred in, such as Three Days of the Condor, which have clearly influenced this Marvel sequel.
Steve Roger’s has spent his time, since being defrosted at the beginning of The Avengers, adjusting to the twenty-first century and the cultural changes that have occurred since he was frozen during world war two, during a mission to save the Allies from The Red Skull. Now he must learn that the old black and white morality of the Second World War no longer exists and has since been replaced by a new grey morality of international espionage. The film references the real world issues of whether it is right to sacrifice the liberties and freedoms of the public to protect them from terrorists and would-be evildoers. Rogers’ own conclusion to this conundrum is defined by clear morals that are sadly considered seventy years out of date by his co-stars.
This situation is made even more confusing and dangerous with the arrival of the mysterious Winter Soldier, a soviet era assassin sporting a bionic arm, who is sent to finish a new assignment: to kill Nick Fury. This villain has to be one of Marvel’s most entertaining and fearsome, he may only say approximately five sentences in the whole 136 minute film but his presence is constantly ominous and his back-story anchors him heavily to Rogers’ own past. His presence also sets up the most tense and enjoyable action sequences to feature in any Marvel movie yet. I can personally state that he is one of Marvels most interesting villains, only beaten to the top spot by the thrice-appearing Loki (Tom Hiddleston).
Evans is entertaining as Steve Rogers whose ideological turmoil forms the main crux of the character development, but also leads to some of Marvels trademark humour as he struggles to catch up with the events of the last seventy years and his fascination with the Internet. Johansson’s Black Widow is equally humorous but arguably the deepest character of all, finally convincing me that fan outcry for a Black Widow movie is completely justified. Finally, my other notable cast member is Anthony Mackie who is a newcomer to the Marvel universe but also creates some entertaining scenes of his own, acting as the human element to truly make this story relatable.
Lastly, another thing I loved about this movie was the number of references to where the future of Marvel movies will be heading. This may be a common aspect of the previous films with each of the previous Iron Man, Thor and Captain America movies building up to The Avengers but it is no less affective this time around, giving fans a little clue as to what to look forward too. This time around there were two which caught my eye, first was the series staple of the “post-credit scene” which featured a unique twist on a popular brother-sister team from another of Marvels titles as well as a possible new villain. Secondly, a slightly smaller hint near the climax is a spoken list featuring the name “Steven Strange” which is a possible allusion to another of Marvel’s heroes, Doctor Strange. And seeing that Marvel have a project for 2016 which Kevin Feige, head of Marvel studios, has yet to announce, a Doctor Strange movie could not be a big leap.

Captain America 2 is a fast paced action romp with strong characters and explosive consequences that have the ability to affect all future Marvel releases. The risky move of incorporating such a massive change into an admittedly minor hero compared to Marvel’s other properties has paid off though. All of this results in The Winter Soldier being one of the most memorable movies of the year which I have nothing bad to say about other than a few minor plot holes which are to be expected with such an intricate story.