American Hustle is what many would state to be David O. Russell’s masterpiece; everything from the cast to the script to the setting seems to be of the highest calibre and the accolades the movie received prove this point. I feel that what really makes the movie as stupendous, comedic and intriguing as it is perceived is not simply due to the actors or the plot but the subtleties laden throughout the movie and the precise portrayal of the time in which the events of the ABSCAM operation took place. 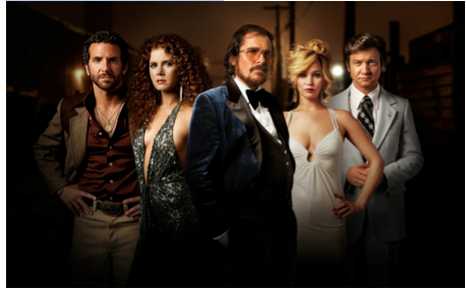 The film starts up in the year of 1978 and centres around one Irving Rosenfeld; a cunning con-man (expertly enacted by Christian Bale) who we learn has evolved from smashing windows to earn his father’s glass company more business to a full-on fraud who runs a false loan company which prays on the desperate and who even sells some fake paintings on the side with the help of his mistress Sydney Prosser (played by the astounding Amy Adams).

Whilst Irving dreams to one day be with Sydney he is, to his distress, already married to Rosalyn (Jennifer Lawrence) and fears that if he leaves her he will be denied the opportunity to keep in contact with his adoptive son (and Rosalyn’s biological child) Danny.

Unfortunately for Irving and Sydney, who poses as “Lady Edith Greensley” (a persona created to aid their scheming ways), one of their deals goes south quickly when the illegal loan they indulge in with a seemingly naïve civilian is revealed to in fact be a well-planned ruse to catch couple in the act, with Richie DiMaso (Bradley Cooper) acting as an undercover FBI agent.

Richie persuades Irving to take up an offer which will benefit them both; Irving and “Edith” (who the clever cop has still not found to be a guise for Sydney’s true identity) will both be provided immunity for their crimes but only if they help Richie perform four more scam busts in order to hustle the hustlers.

Eventually the plot thickens as the operation known as ABSCAM grows and grows and it is found that corruption runs much deeper than anyone could have imagined.

My thoughts:
The plot:
Because the movie is loosely based on true events (which is revealed by a title card at the film’s beginning) the plot itself is more or less predetermined, but this did not stop Russell from changing some of the details and making adaptations to dramatize the true story of the ABSCAM operation. Examples of this include the fact that Evelyn White (who is named Sydney Prosser in the movie) was not in fact as involved in the scams as much as she is given credit and was never in on the ABSCAM operation at all, or how Cynthia Weinberg (Rosalyn in the film) never blew her husband’s cover or became involved with the mafia. Obviously because the movie is akin to a “how did they pull it off” heist film the plot can seem convoluted at times. The aid of flashbacks with Irving’s voice-over explaining how the hustle develops helps to simplify the elaborate schemes into more manageable stages that are easy to follow which keep the audience in the know if they happened to find themselves stumped. The overall evolution of DiMaso’s plan and Irving’s involvement is a very intense tale that showcases how the ABSCAM operation spiralled out of control and is a definite rollercoaster of situations and emotions for the characters which is extremely well written, but somewhat annoyingly the actual build-up to the story’s key theme of catching the corrupt by corrupt means is let down by a lazy montage whereby the bad guys are caught out one after the other; a much less gratifying resolution that is almost definitely due to time constraints.  A solid story that is well structured but not too linear. The plot twists keep the audience on the edge of their seats and the character development is terrific. My only complaint would be the montage scene which is rather disappointing.


The cast and accolades:
The first thing that people will notice about this film is most likely the cast, and why shouldn’t it be? Not many movies have Batman, Hawkeye, Louis Lane, Katniss Everdeen and that-one-guy from the Hangover in it do they? All jokes aside the acting is pure gold, as is expected, and the roles of each and every character is performed amazingly. Christian Bale makes a very believable, balding Jewish man from New Jersey surprising and his range of emotions shown through Irving show he is a true method actor. Bale has been nominated for many awards including an academy award for “Best Actor” (with the results still to be revealed) and a Golden Globe Award for “Best Actor in a motion picture musical or comedy”. Amy Adams also provides an engaging adaptation to Sydney and has received much critical acclaim for her performance including a Golden Globe for “Best Actress in a motion picture musical or comedy” however I feel of the five key members of the cast she provides the weakest performance. This may simply be due to the character of Sydney not being all that likable herself but Adams’ inability to provide a convincing British accent cannot be pardoned. Bradley Cooper provided a terrific performance and emulated Richie’s growing need for recognition stunningly as well as acting as the comic relief for when the plot became somewhat heavy. He has been nominated for both the Academy Award and the BAFTA award as the best supporting actor in a motion picture. My personal favourite throughout the movie is most definitely Jennifer Lawrence, purely due to the hilarious circumstances she gets herself into, including events such as setting her house on fire, blowing up a “Science oven” (unbeknown to her to be a microwave) and crashing the family car. She reflects Rosalyn’s manic and erratic behaviour to an amazing degree and it is no wonder she won the International award from the AACTA and Golden Globe award as “Best supporting actress”. Although only appearing in a few select scenes Jeremy Renner plays the part of the corrupt mayor of New Jersey; Carmine Polito. His portrayal makes the audience extremely empathetic towards Polito’s cause and whilst not receiving any individual awards I feel he provides a class act in this ensemble. Overall the Movie itself obtained nominations for 7 Golden Globe, 10 British academy film awards, 10 Academy awards and went on to win the Screen Actors Guild Award for Outstanding performance by a cast in a motion picture. Truly a stupendous cast that is very deserving of every award and nomination.


The setting and aesthetics:
The atmosphere created in the movie is so reflective of the 70’s/80’s setting, and the styles of clothing and hair are dead on, especially Bradley Cooper’s perm and Christian Bale’s “elaborate” comb-over. The sets are just right; the bars and night clubs are dimly lit with smooth jazz, the houses have the typical tacky wallpaper which you would only find in your grandparents house and even the offices have those gigantic brick phones. The attention to detail is truly what makes this movie the stunning success it is. The highlight of the movie for me, besides Jennifer Lawrence, is the amazing costumes and sets. The crew responsible for the overall design definitely deserve every penny they earned for working on this film.


The cinematography and effects:
There is not much to say on this front seeing as how there are very little scenes that venture outside of characters standing and talking in a room until the next cut, but the transitions and angles are minimalistic yet refined. The stationary shots make it easier for the watcher to keep their attention on the dialogue and when in a tense situation the dim lighting and close-ups used create tension which is very apparent and purposely emphasised. Although very little CGI effects are used in the movie they are seamlessly integrated. Maybe a little bit too straightforward for my tastes but there is no fault to be found; this isn’t a movie with many action scenes, besides, camera angles and effects which are too elaborate would probably lessen the focus on the actual script and be distracting.

In conclusion:
A very fine piece of work indeed, with a well-rounded mix of exceptional casting, directing and design (both of the characters and the aesthetics). I look forward to David O. Russell’s following works, and it would be great to see this group of actors and actresses collaborate again.