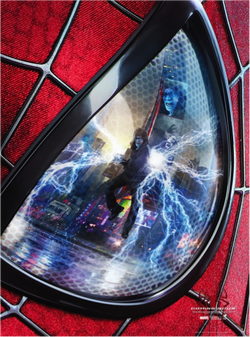 The Amazing Spider-Man 2 is, as the title suggests, the sequel to 2012’s The Amazing Spider-Man, which was a reboot of the original Sam Raimi Spider-Man trilogy...confused yet? Simply put, this is the newest Spider-Man movie starring Andrew Garfield (The Social Network) as Peter Parker a.k.a Spider-Man himself and Emma Stone (Easy A, The Help, Gangster Squad) as his girlfriend Gwen Stacy.
The film, directed by Marc Webb, follows Spider-Man in his latest conflict and picks up several months after the events of the first film. It begins with a high octane car chase between Paul Giamatti’s Alexei Sytsevich, a.k.a The Rhino, and the police as the Russian gangster attempts to steal dangerous chemicals. Luckily, everybody’s friendly neighbourhood Spider-Man intervenes while on the way to his high school graduation. The delay is temporary, with Giamatti’s appearance being merely a cameo to reintroduce the titular hero. Soon though we are thrust back into the teenage drama which Peter has to deal with in his daily life, mostly the back and forth between whether Peter and Gwen can be together after Peter promised her dying father that he would keep his distance from her, in an attempt to keep her safe, at the end of the previous film. This would be easy, if Gwen wasn’t adamant that it is her life and her choice. Eventually however, evil rears its ugly head in the form of Oscorp employee Max Dillon played by Jamie Foxx (Django Unchained) who is caught in an accident and becomes Electro, giving him the ability to control and discharge electricity at will. Finally, Peter’s old friend Harry Osborn, played by Dane Dehaan (Chronicle), returns to New York City to take over as CEO of Oscorp only to discover he hasn’t much longer to live.

As you can see, a lot goes on in this movie (and I haven’t even scratched the surface for fear of giving too much away!) with all of this jammed into 142 minutes. Unfortunately, this is such an ambitious movie which attempts to lay the groundwork for both future sequels and The Sinister Six and Venom spin off movies, which have already been announced, that it feels cramped and over-stuffed. This leaves very little room for the character development the current movie desperately needed.

The overcrowded roster means that all three villains in this super powered gauntlet: Electro, The Rhino and The Green Goblin, felt underwhelming. Electro undergoes a transformation from a nerdy, downtrodden electrical engineer who only wants to be noticed and has an obsession with Spider-Man to a glorified bodyguard for whom I felt little to no sympathy for. Then there was the cameo appearance of The Rhino who also felt underused; Paul Giamatti is a very skilled actor and seemed like a strange casting choice in the first place for such a mainstream action movie but his character still had great potential which became a missed opportunity. However, of all the villains it was Harry Osborn/The Green Goblin who rose to the top in this stuffed blockbuster. Dane Dehaan is a great actor and a rising star in Hollywood after appearing in Chronicle. He manages to create a fresh, unique and, in my opinion, creepier version of the character which keeps it interesting for returning fans after James Franco’s original portrayal of the same character in Sam Raimi’s trilogy.

However, It is Andrew Garfield and Emma Stone who offer the stand out performances in this movie, with the sequel bringing the Parker-Stacy relationship to the forefront of the story. This is the perfect change because one of the greatest moments of the movie is a simple conversation between Garfield and Stone while confined in a cupboard and is a testament to their quality. Of course it helps that the pair have such great on screen chemistry, creating a love story you can actually root for, without creating an annoying, angst ridden teenage romance which has recently become a Hollywood trope; there isn’t even a love triangle to confuse things! In fact in some scenes I even felt like I should be giving the two some privacy and that I was slowly becoming the biggest third wheel in history!

Marc Webb clearly feels more comfortable directing the more dramatic scenes and it was a stroke of genius to make the couple’s relationship the chief focus of the film and build the other aspects around this, creating a brand new take on the classic story and bringing the franchise back to what made it so original when it first hit the shelves in 1962: the fact that Peter Parker is a teenager first and foremost, and Spider-man second. The other aspects may lack slightly but still bring enjoyable set pieces such as a great slow motion clash in Times Square and a final climax which left me speechless for a long time after the credits rolled.
Finally, I feel compelled to mention that since the first film I have been one of Andrew Garfield’s biggest critics. I didn’t believe he was right for the part, with Parker supposed to be a small, geeky guy while Garfield is neither of these. However, I will be the first to admit that his performance in this instalment has changed my mind. He plays the teenage protagonist realistically and brings a sense of humour to the role, the likes of which I don’t believe has been brought to the character before.

Overall, Marvel comics most popular hero’s latest outing is technically a mixed bag. It has its problems sure, but what it does well it does amazingly and makes its problems completely forgettable because you are having way too much fun to care about them. The film is also the only superhero movie that has such loveable lead characters that its finale can bring the audience and even a few friends of mine to tears. This is a new Spider-Man with a new suit, a new sense of humour and an even greater sense of human relationships. Like many, I was always a fan of the original trilogy, with Sam Raimi’s Spider-Man 2 commonly considered a blueprint of how a super hero movie should be made. However, The Amazing Spider-Man 2 matches it step for step and perhaps even out does it in several ways, fully defining the reboot series as a force to be reckoned with.