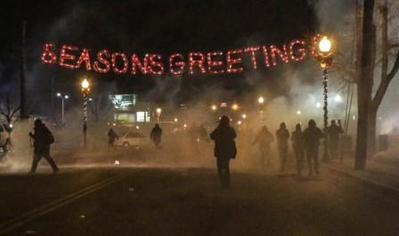 
This certainly has been one of the most polarising events in recent American history. Many are passionately against the Grand Jury's decision not to indict Darren Wilson.

The reason this case has sparked so much controversy is because of the seemingly suspicious circumstances surrounding Mike Brown's death. Indeed, there is a considerable amount of evidence to cast doubt on the situation. Why was Michael Brown's body allowed to lie in the street for four hours? Why didn't Darren Wilson write a witness report as soon as the event happened? Could it have been to allow time for the police to fabricate another story? Why did Wilson claim that during the physical altercation he felt like a "five year old holding onto Hulk Hogan" when Mike was not that much bigger than he is (Brown was 6"4 and 290 lbs compared to Wilson who is 6"4 and weighs 210 lbs). If Wilson claims Mike's punches would have eventually rendered him "unconscious" and proved to be "fatal," why were his injuries so minor? I mean, let's face it - Wilson came out a lot better than Brown - a slightly reddened, swollen face, is nothing compared to Brown's six bullet holes. Furthermore, why wasn't Wilson's gun - a crucial piece of evidence - dusted for prints? And isn't it possible that when Brown leant forward (supposedly to charge at Wilson in an act of aggression) he could have been getting down to his knees, or simply leaning forward out of pain? Let's remember, he had just been shot numerous times. Moreover, even though the police initially stated that Brown died 35 feet from the car, in actual fact Brown died about 150 feet from the vehicle. Stating that he was 35 feet away could have been a deliberate lie because an officer is allowed to use force when in danger if the threat is 25-35 feet away, hence justifying Wilson's actions. Wilson also said he knew about the robbery during the incident, meaning that he could legally shoot Brown to prevent a dangerous suspect from fleeing. However, Ferguson Police Chief, Tom Jackson cast doubt on whether or not Wilson knew about the robbery when he stopped Brown for jaywalking.*

And what about the conflicting eyewitness accounts? Witnesses who went public claim that the two fought in the car, and then Wilson chased Brown and shot him to death as he attempted to surrender. Other eye witnesses who did not go public corroborated Wilson's story, saying Brown did not surrender and was charging towards the officer. The eyewitness accounts which absolved Brown of blame were said to be "unreliable" as the witnesses often changed their story, or gave an account which was inconsistent with the findings from the autopsy. But is it arguable that the witnesses' accounts were too quickly dismissed? Although it is inconclusive, the autopsy report shows that one of the gunshot wounds to the arm could have occurred while Brown had his hands up.

One chart from the PBS NewsHour can help paint a clearer picture: 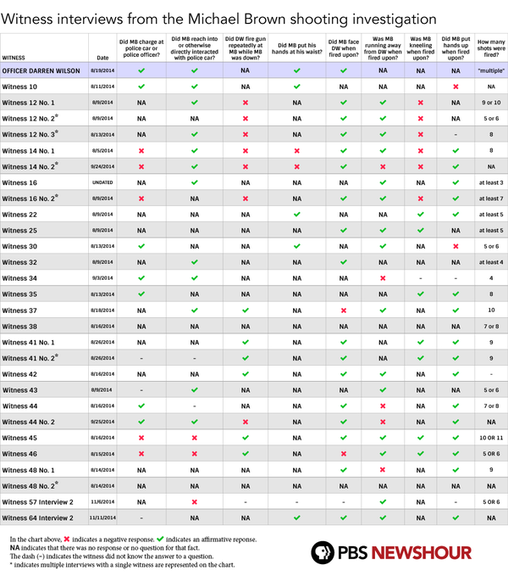 Finally, and this is personally my biggest issue with the case, was it really necessary to shoot Brown six times? Could his death been avoided? While I understand why Wilson could not use the pepper spray initially while the two were fighting in the car in such a close proximity, I fail to see why he did not use it to defend himself against the charging Brown when the two were outside the vehicle in the open air.

Alternatively, there are some who support Darren Wilson's story, and believe the shooting was justified. It's true - this did take place in Ferguson, an area where tensions between police officers and citizens are high. It is possible that Brown was the one to antagonise the officer, and initiate the violence which prompted the shooting. This version of events becomes much more feasible when viewing the surveillance footage showing Brown's aggressive actions towards the store manager during the robbery.

Some are concerned with the resulting hostility and harassment law enforcement is now facing, and the 'kill all cops' attitude that is sweeping through the US. Others are angry that their communities have been affected by violent riots and looting. Some believe the protesters are simply caught up in a type of 'mob mentality', and that supporting this event has become more of a trend than a protest for positive change.

What can we learn from the situation in Ferguson? Well, certainly not what actually happened to Mike Brown. It is doubtful that we will ever know the exact circumstances surrounding his death, and whether or not Darren Wilson was justified in his actions. However, the lack of clarity surrounding his death has managed to illuminate several important issues in America today: