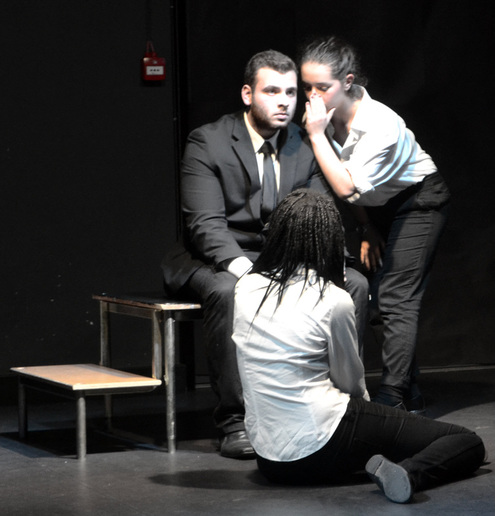 Just over an hours worth of inspiring performances from Year 11, 12 and 13 drama and music students took place in the Arts Centre on the evening of Wednesday 2nd October.

Although the students had only been preparing since the beginning of this academic term, the standard of work, which will later contribute to the GCSE and A-Level final grades, was exemplar. The newly re-furbished Arts Centre, having opened in September 2011, is fitted with a professional lighting and sound system, which contributed to the captivating production, operated by Year 11 student Jack Homer.

The first pieces were those performed by Year 11 students, the youngest actors of the night (but by no means the least talented). The heart-wrenching performance of “Two” by Jim Cartwright starred Laura Straker, Argyris Gabriel and Hetal Mistry and was followed by the comical piece titled “The Government Inspector” (Nikolai Gogol) starring Nicole Caffell, Thomas Emery, Jack Jones, Stephen Reeder, Johnnie Spillane, Luke Ward and Charlie Williams. These impressive performances were followed by two piano recitals: Molly Martin in Year 11 and Michelle Hoe, a Year 12 student, before moving on to the AS-Level performances by Year 12 students.

“The Woman Who Cooked Her Husband” (Debbie Issit) starred Michelle Eghan, Georgia Fresco and Ciara Hudson. As suggested by the title, the content of the piece was far from pleasant but the girls performed amazingly well, despite a slight hiccup in the middle. The other Year 12 piece, titled “Nasty Neighbours” was both funny and intriguing, and showcased the talented Gleciane Gloria, Phoebe McRedmond, Shane Priest and Kobi Scarlett. This was then followed by two more incredible musical performances: Les Miserables’ “On My Own” was sung by Georgia Fresco, followed by David Guetta’s “Titanium”, sung and played by Shane Priest on the piano.

Having already viewed some exceptional work, the audience were greatly anticipating the devised work of the Year 13 students.  The pieces were constructed around the theme of ‘disaster’ and ‘national emergency’, and all were based on the events of the disastrous 9/11 terrorist attacks. “Meta-Psychotic” silenced the audience with the impressive and convincing acting of Zhané Bailey, Katie Hare, Daisy O’Hara and Jae Stuart. “I F***ing Hate Trains”, accompanied by music by the band Alt-J making it even more captivating, was performed by the talented Jay Kamara, Eilis Martin, Shannon O’Leary and Tabby Rodney.  Last but not least, the final dramatic performance, titled “93”, starred Maddie Rakic-Platt, Jay Risheq, Ashleigh Simmons (pictured) and Sarah Harrison. The final performance of the night was a musical piece: “Summertime” by Tabby Rodney, whose vocals were the icing on the cake for a terrific evening of performances.

The night gave the opportunity to view only a selection of the work by drama students, and all groups are currently making finishing touches to their final pieces. However, having seen the standard that is being produced already, there is no doubt that the final pieces will be mind-blowing. The final performances are scheduled for later on this academic term and would be a worthwhile evening to attend for those interested in drama, want to support their peers or just to see some amazing work! ‘An Autumn Evening of Music and Drama’ was an undeniably brilliant debut setting the bar for a fantastic year of music and drama events.