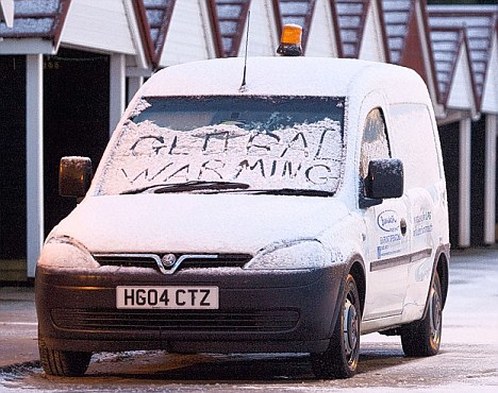 It has come to my attention that the risks of global warming are being severely downplayed due to the 'polar vortex' North America is experiencing. The BBC informs us that the east coast of the United States is undergoing a 'second major winter storm of the year, with up to 12in of snow, strong winds and bitter cold forecast.' Unfortunately, this news of freezing weather has led to some members of the public questioning the existence of global warming altogether. I mean, how can global warming be occurring when places in the world are becoming colder? Where is the 'warming' we are meant to be experiencing? Does this mean that the whole thing is just one big sham?

Now, perhaps it is not entirely the public's fault for this misconception but rather the misleading name 'global warming' itself. The term seems to imply that every country on earth will undergo a rise in temperature, however, this is not necessarily true. Yes, the overall global temperature is expected to rise as greenhouse gases absorb infrared radiation from the sun and prevent it from being reflected back into space. However, this increase will not cause every country to 'heat up', so to speak. What global warming will actually lead to is more extreme weather patterns across the globe, inflicting both warmer weather and/or cooler weather.

This is why the freezing temperatures North America is currently enduring do not in any way disprove the existence of global warming. The 'polar vortex' describes the cool winds surrounding the arctic. Because the global temperature has risen, the arctic is warming twice as fast as the mid-latitudes, decreasing the temperature difference between the two and causing the polar vortex to weaken. This weakening pushes colder air into mid-latitude areas such as the US. The effect of this is that some areas of the United States and Canada are facing a more intense winter this year. While it must be acknowledged that there are other aspects that may have led to the weakening polar vortex, the evidence strongly suggests that global warming is the main contributing factor. So, if anything, this polar vortex only provides more evidence to support the threat of global warming.

But why should we be worried about it?

There will be many negative worldwide effects, some of which may even be experienced during your lifetime. To name a few:

How about all of us over here in freezing England? Surely we could use a bit more sun?

Well, don't cancel your holiday plans just yet - Britain will not be entering a summery, tropical paradise any time soon. In addition to some of the factors listed above, we are also more likely to face a cold wave. There's a reason Britain does not suffer the same long, harsh winters as Siberia, despite being on the same latitude; the Gulf Stream is largely responsible for our milder winters. This oceanic current carries warm, salty equatorial water to the coast of Greenland, warming the countries of the North Atlantic along the way. If global warming increases, ice caps in Greenland will melt, leading to an influx of water into the North Atlantic ocean and disrupting the current. This will effectively cause Britain to encounter winters which are five degrees colder (just what we need - isn't it cold enough?). It might also be worth mentioning that at the end of the last ice age when the Gulf Stream was interrupted, the North Atlantic region experienced cool temperatures for 1,300 years despite the fact that the earth was generally heating up.

Still think global warming is not a big deal?

Although the issue may not initially appear life-threatening, leading to the type of 'doomsday' event portrayed in movies such as The Day After Tomorrow and 2012, the gradual process is nevertheless a dangerous one. I implore you to start taking our future on this planet more seriously, if you haven't already. After all, this is the only shot we get. Let's not mess it up.

The risks global warming poses are all too real. Check out these websites to find out what you can do to play your role in stopping it: